As of October 2021, best-practices for using Switchboard and Zendesk Agent Workspace have been updated - please refer to Configuring the switchboard with Zendesk and a bot partner for details.

The following guide covers key concepts around the Sunshine Conversations Switchboard API, how it can be integrated with a custom bot or one of our bot partners’ platforms, and how to pass control of the conversation between Zendesk and your bot using the switchboard.

Handover with the switchboard

With Sunshine Conversations’ Switchboard API, you can achieve bot-to-human handover across messaging channels and business systems. The switchboard allows you to programmatically route a user’s conversation through third party systems such as bot frameworks and helpdesk systems, similarly to how an operator patches phone calls via a switchboard. An unlimited number of business systems can be connected to the switchboard and you can move the conversation either to the next integration in the chain or directly to a specific system.

Intelligent bots can scale your customer service team, however even the cleverest bot will eventually need to escalate an issue to a human being. In this example, the business is represented by two different switchboard integrations: a bot and a help desk business system. 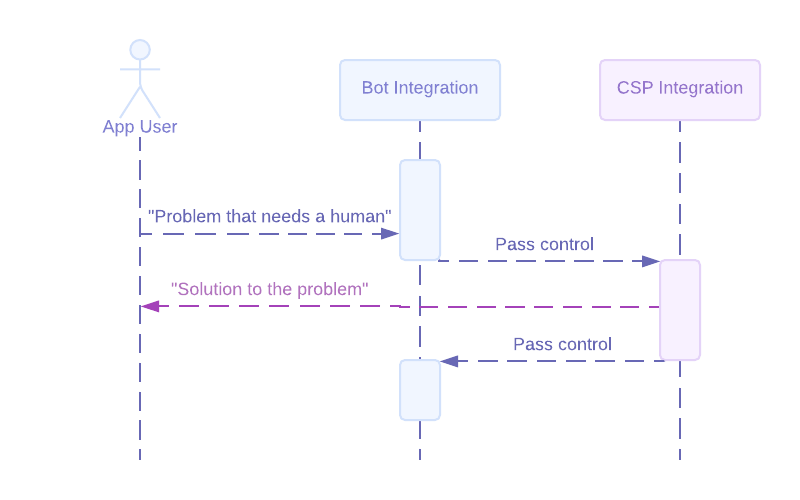 Once the agent has solved the end user’s problem, they will close the ticket from their help desk system, at which point the user’s conversation would be be switched back to the bot integration for any further questions or support requests.

Bots are perfect for automating certain workflows within a conversation so that agents can more efficiently serve multiple customers at once. Flows such as payments, authentication, or knowledge base FAQs are great candidates for switchboard bot integrations. Once the agent identifies the next step for the customer, the agent can pass control to the bot, who can pick up the conversation with the customer and pass control back to the agent once the bot-assisted workflow is completed.

For businesses who have tiered support, it’s possible that a conversation starts at the first tier and then needs to move to another support system altogether. In this situation, the switchboard can hand off the conversation seamlessly between systems so that tickets in a given system can contain relevant history, while only being created when they need to be actioned within that system, and not before (signalled by the passControl).

The passControl action is idempotent if either:

In the latter case, when a passControl API call is made with the next keyword:

If the same switchboard integration tries to invoke passControl multiple times in succession using the next keyword, and the initial request satisfies the conditions above, control is passed; any subsequent requests along with their metadata are disregarded, since the calling integration no longer has control of the conversation. This behavior prevents the calling switchboard integration from mistakenly causing multiple transfers.

In the real world, humans aren’t always immediately available. Different systems might also benefit from being able to share control of a conversation, instead of having abrupt transfers of control as the only option. A more natural bot-agent handoff can be implemented by introducing two new actions: offerControl and acceptControl. 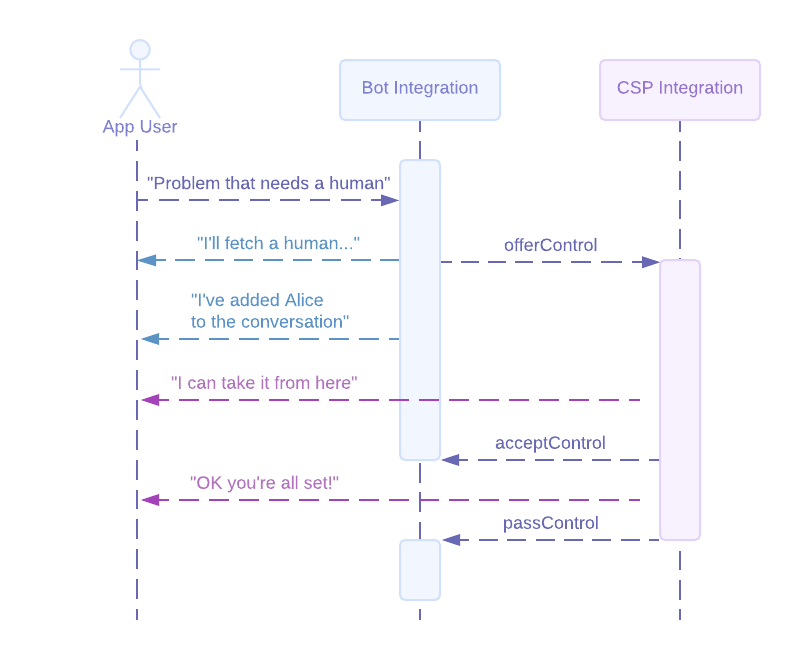 Note that the use of releaseControl differs from the case of using passControl to hand off back to the default integration. When using passControl, the assigned switchboard integration is determined based on the switchboard configuration when the interaction concludes. When using releaseControl, the assigned switchboard integration is not computed until the user returns to the conversation and starts a new interaction. If the switchboard configuration was changed in the meantime, the new default will be correctly used.

Unlike the Offer and accept control scenario above, this is an explicit means for returning conversation control back to its starting state, rather than escalating control to the next system in the hierarchy.

The releaseControl action does not create a webhook event when the ticket closes successfully. 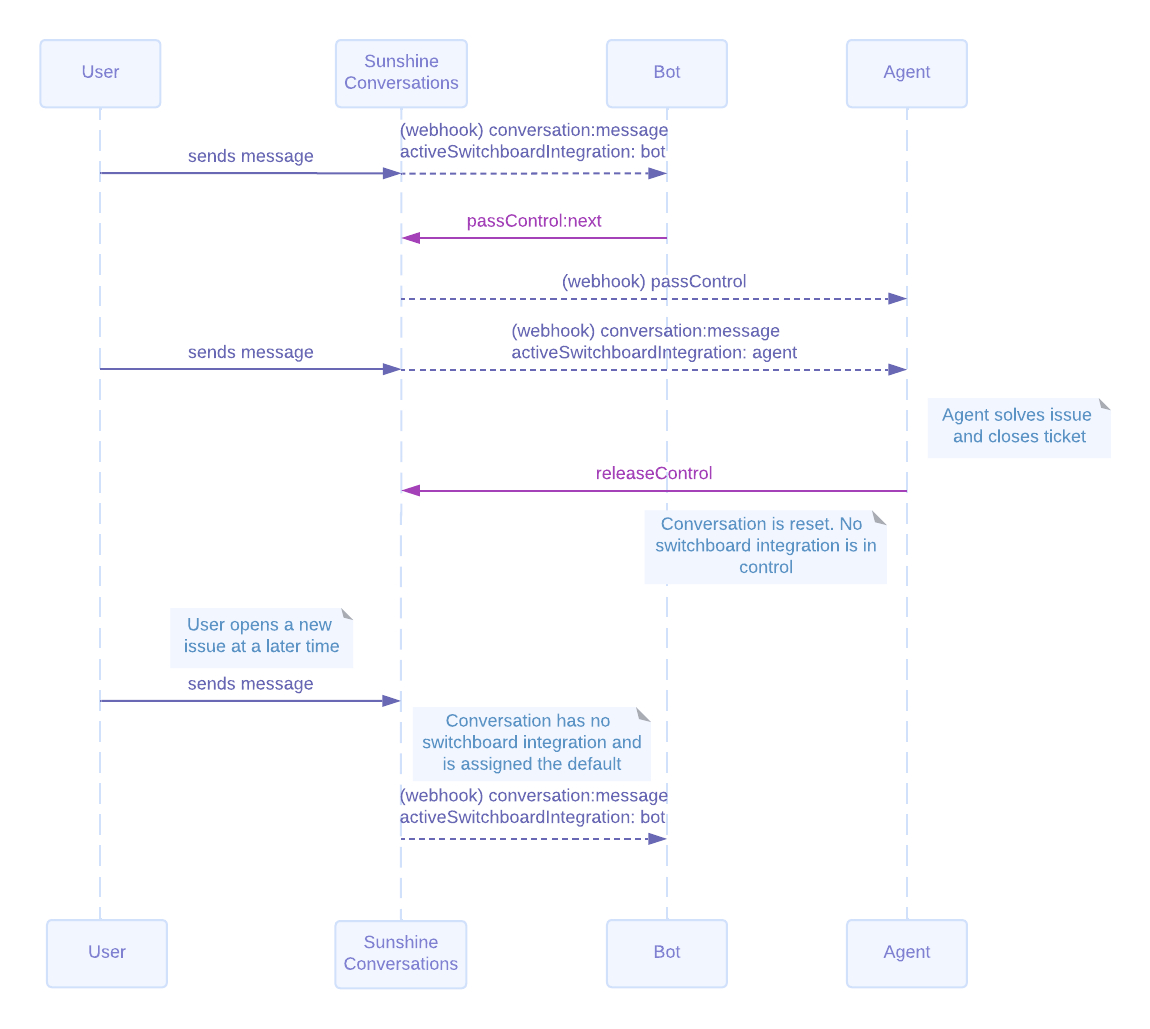 The pending status is used for a switchboardIntegration that has been offered control of a conversation, but has not accepted control of it yet.

There can only be one active and one pending switchboardIntegration at a given time for a given conversation. 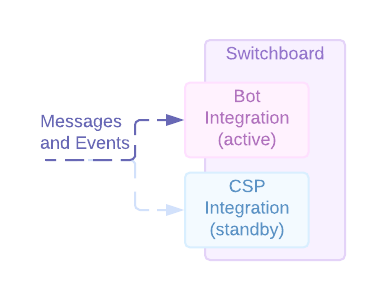 A switchboard integration represents an integration’s membership within a switchboard, as well as their presence and status in an ongoing conversation. Integrations can live on their own, without being a member of a switchboard.

When a switchboardIntegration is active (or configured with deliverStandbyEvents: true), they can expect to receive the following v2 API events (related to conversational activity):

Other events will be sent to all switchboardIntegrations linked to a custom integration.

When a switchboard integration wishes to transfer control, they may look at which other integrations are involved in a conversation, but they don’t need to.

The switchboard integration may invoke these actions by calling the REST API or by sending a text message using the shorthand syntax, which are both detailed below.

What to expect during a switchboard project

Which problem is the switchboard solving?

Are you looking to solve bot-to-human handover? Are you passing a conversation through multiple third party systems as part of an escalation flow?

Your CX problem will drive the implementation of your switchboard and the switchboard integrations within it.

Bots on the switchboard

If you’d like to add a bot in your CX flow, you can either select one of Sunshine Conversations’ bot partners in our marketplace or bring your own bot to the switchboard.

The following is an overview of the switchboard setup process. Each step is covered in more detail in the sections below:

Once you’re ready to launch your switchboard, turning it on is a simple API call away.

Agents and bots may invoke passControl, offerControl, and acceptControl actions by sending a specially crafted text message. The syntax follows the structure used by template messages. The syntax supports both %(())% and %{{}}% variants.

The releaseControl action does not currently have a shorthand syntax.

Unlike the template syntax, the shorthand syntax is not meant to be combined with any surrounding text. If a note is intended to be sent to the user along with the action, it must be sent as a separate message.

A message sent containing a valid syntax pattern will be intercepted and not shown to the appUser, and any surrounding message text will be discarded. To illustrate, if an agent sends a single message with the text “I’ll switch you over %((switchboard:passControl))%”, the control will be passed as if the agent had sent the text as %((switchboard:passControl))% on its own.

Configuring the switchboard with Zendesk and a bot partner

You’ll need the following before you get started with switchboard and a 3rd party bot:

Some bot partners may also request additional credentials so they can manage the switchboard on your behalf.

After you’ve granted the bot partner access through OAuth, the partner will appear in your list of app integrations, alongside Zendesk or any other configured channels.

Set up your bot

Build your bot flows on the bot platform and publish them according to the partner’s instructions.

Some bot partners can create a switchboard on your behalf. If you’d like to create and manage your own switchboard, read below:

Switchboards are created with an empty post body. They begin in a disabled state by default so as to not interfere with the delivery of messages while it is being configured. We’ll enable the switchboard as the final step of this guide.

In this step, we’ll place your existing bot integration on the switchboard. We’ll focus on a bot-to-agent handover use case, where you’re using Zendesk as a business system and a 3rd party bot to handle initial incoming messages.

The first switchboard integration you will set up is for the third party bot partner’s integration.

The second switchboard integration will be for your Zendesk (Agent Workspace) integration, so that end users can reach your bot via your connected channels.

Best practices for integrating systems to a switchboard alongside Zendesk Agent Workspace have been revised:

Now that you’ve configured your bot and Zendesk Agent Workspace switchboard integrations, you’re ready to enable your switchboard and handover the conversation.

A custom integration contains a webhook which can point to any external system or integration (without OAuth), including bots, other business systems, etc. Follow these steps when adding such a system to a switchboard.

Pass control from bot to agent

Now that your switchboard is enabled, you can pass control from your bot to your Zendesk agent.

Use the passControl action or shorthand syntax to incorporate a “Speak to an agent” flow in the bot interface.

When an end user engages with this flow (e.g. by tapping a “quick reply” button or typing “Speak to an agent”) then the conversation should be passed from the bot to the next switchboard integration— your Zendesk agent.

You can paste the shorthand syntax directly into the body of the ticket to submit, or you can use an existing Zendesk feature like macros or triggers to send the passControl action.

Your bot will need to listen to the v2 webhooks switchboard events so your bot knows when it’s received control of the conversation again:

Receiving a passControl event shows which integration is active in the conversation and therefore expected to respond to the user.

Switchboard webhooks for pass, offer, and accept control are detailed in the API reference.

When passing control to Zendesk’s Agent Workspace you can include metadata to populate ticket fields on the Zendesk ticket. Note that this feature is currently only available to customers using Agent Workspace and not earlier versions of Support.

The schema for the metadata is as follows

So, for example, the JSON of a passControl body sent to Zendesk would look like:

A subset of Zendesk system ticket fields are supported in the switchboard:

Are you interested in becoming a Sunshine Conversations bot partner?

If you’d like to enquire about becoming a Zendesk Sunshine Conversations Bot Partner, then please drop us an email at alliances@zendesk.com and we’ll be in touch!