We believe versioning is a crucial part of our offering. By providing a consistent versioning scheme for our API & Webhooks we are able to help you manage and predict how our changes will impact your usage. When we have to change the API in a backwards-incompatible way, we release a new version to avoid breaking your integration. You can opt-in to the new version whenever you’re ready to upgrade.

This guide covers how versioning works at Sunshine Conversations and how to safely upgrade to new versions.

When making calls to the Sunshine Conversations API you specify the version you want to use directly in the endpoint URL.

Webhooks naturally follow the same version and payload schema as the API. You specify which version Sunshine Conversations should be using when calling your webhook endpoint during the custom integration’s creation.

When creating a Webhook via the Sunshine Conversations dashboard select the desired version from the version dropdown. 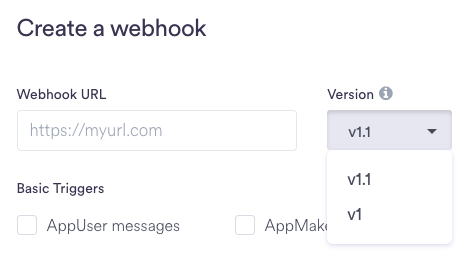 We consider the following types of changes to be backwards compatible. In other words, these types of changes do not require a new version of the API. When writing code against Sunshine Conversations APIs and webhook payloads, take care to ensure that the types of changes listed below would not break any assumptions you make in your code. Your JSON parsing logic should be configured not to throw an error when an unexpected key is found, or when an enum contains a previously unknown value. Assume also that any JSON field returned as an array may contain multiple items in the future.

The list below applies to our REST API, webhook events, the SDK public API, and our API libraries:

We maintain a changelog of backward incompatible change as part of our API reference documentation.

We also have a platform wide changelog that covers the API, Web and Mobile SDKs, Integrations, and the Web dashboard available here.

Before you start using a new API version, please make sure you are aware of the following:

If you are using one of our API libraries, you’ll need to update to the following version in order to start using the v2 API:

To avoid missing messages for apps used in production, follow the steps below to upgrade your Webhooks to a new version.